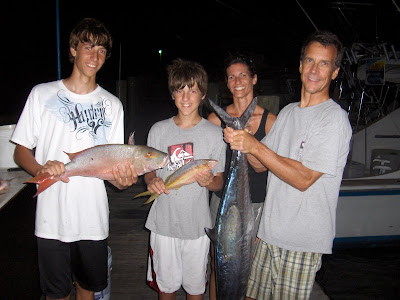 For those of you who have inquired about Kevin Nelson and what's going on in his life, this pic ought to sum it up. He's traded his mountain bike for a fishing pole. Last time he looked at his bike the tires were flat and there was so much dust on it he couldn't tell what color it was. I've invited him back to SLC to do some hill training so he can get back in shape but he says the Florida hills are only 5-10 feet high so he doesn't have much need for what we have to offer. Sounds like he's doing great and all is well on his end.
Posted by Brad Mullen at 8:08 AM No comments:

A Fall Day in the Wasatch

There's not too many things more fun than a fall day mountain biking in the Wasatch. That's what I did for a few hours on Saturday, and I was not disappointed. 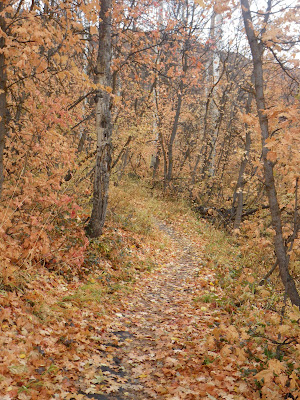 I rode the Flying Dog trail clockwise from the 24/7 side and experienced much of the the Wasatch offers weather wise. I started dry and loaded with rain gear, just in case, since the sky to the west was black - 1st hint. Nobody was in the parking lot, so that was good - 2nd hint. Since I like riding when nobody else is on the trail, I ignored the hints and took off.

This ride had it all. It was windy, cloudy, wet and dry, rainy, hailey (is that a word?), tacky, muddy, fast and slow. And, I was paced for about 50 meters by a Sage Grouse that ran 10 feet in front of my wheel. That was really funny and I wish I could of gotten a picture of that.

As for the ride, all was well for the 1st 40 minutes and then it started to drizzle. As I got higher the drizzle turned to light tapioca pellets that barely dotted the trail. 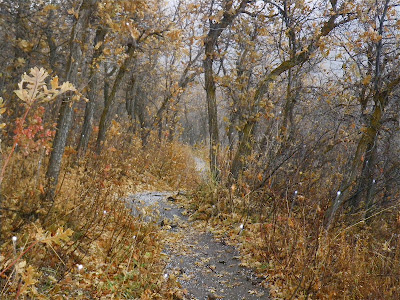 About 5 minutes before the summit I had to put on the rain coat cuz I was getting pelted. The trail was still solid and nothing but leaves were sticking to my tires.

As I headed down the Glen Wild side there was a noticeable difference in the trail surface. My tires were getting muddy and the trail was softer. I opted to take the Preserve Interconnect Trail back to 24/7 instead of muck up the remainder of the FD and that was a good call. The rain picked up but the trail shed the water nicely and mud was not a factor. The descent was chilly, but I was able to get some speed and the fun factor increased noticeably. I made it back to the trail head with frozen toes and fingers, but that was part of the experience, and had a smile on my face the rest of the afternoon. 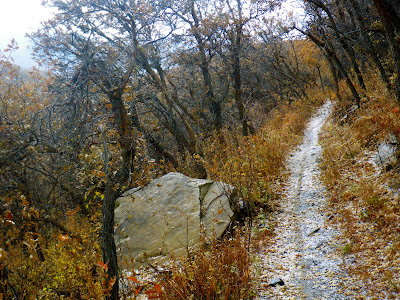 I just love fall riding in the Wasatch.
Posted by Brad Mullen at 10:20 AM No comments:

Race Across the Sky Movie

I just got back from watching the Race Across The Sky movie with Jane, and I'm stoked. Click on the Play Trailer button for a taste of what you're missing. Chris Holley's mug and an Alex Grant's post race commentary added a local flair that makes the movie even cooler. There's lot's of cool riding shots and colorful insightful commentary by Bob Roll. They also threw in a couple of personal stories that got the emotional juices going and show what makes this race what it is - a must do Classic.

If this movie doesn't get you excited about the race, you're dead. I just hope I can get in again in 2010 and get under the 10 hour hurdle.
Posted by Brad Mullen at 8:07 PM 1 comment:

Now that my blood shot eyes have returned to white and the delicious aroma of campfire smoke is fading, it's time to recap the 2009 edition of the 24 Hours of Moab. Of the 7 years I've done this race, the weather was the best I can remember. Sunny, no wind, fast dry course, comfortable days and cool nights and a fantastic collection of friends. What more can one ask for!

As a Grand Masters team (aka the not so pleasant end of the age category spectrum) we again managed to pull off 16 laps and beat the 1st place all chicks team, albeit by only 1 minute 15 seconds! At our present rate of deterioration, can we hold the chicks off for one more year? We may have to recruit a youngster to fight them off in 2010. As for this year, we rode steady and had no mechanical or physical issues so overall the race was a resounding success. Click here for our Mad Dog Gray Hounds results, and here for the overall. Overall we finished 72nd overall out of 365 teams and were 1 minute per lap slower than in 2007. I attrubute that to my horrible night riding times this year.

Captain Bill Dark put together a fun and amply qualified team this year. Jim Westenskow was our rookie, but he rode like a seasoned 24 rider. Jim was the 60+ NORBA National MTB champion 3 years ago and brought a long list of overall top LoToJa finishes with him. At 63 Jim still challenges, and beats, riders decades younger than him. The guys climbs like there's no tomorrow. It was great having Jim on our team and it's going to be sad not having him in 2010. In spite of his great performance, Jim has scratched the 24 hour test off his bucket list and is moving on to other stupid things. Thanks for the great race Jim - it was an absolute pleasure racing with you.

As for my race, I was pleased. My 2 day laps (laps 1 and 4) were strong but my night ones (2 and 3) were my worst ever. This year I found some new lines, rode more efficiently than in past years and finished with a strong 4th lap. Several drops and shelves I've walked in the past I rode this year. Maybe it's the 29er that is giving me more courage, or, age is blocking out my memory. Sand riding has always been a strong point for me and this year was no different - maybe those memories are fantasy too!

An unpleasant lesson was learned this year and that was, weight does not matter when it comes to lighting. I sold my super bright and ultra heavy Nite Rider HID system prior to the race and opted for a lighter weight LED system from Princeton Tech. That was a BIG mistake. My night vision is not the greatest I'll admit, but, the 2- SB2 lights I rode with were barely safe. Although I managed the get through the technical sections, barely, I out ran the lights on the flats and was constantly in fear of going down at high speed. I backed it down more than usual just to stay upright. I will admit my 2nd night lap was better than the 1st, but it was also slower too. Next year I'll come equipped with some serious lighting and will knock off 10 minutes per lap, guaranteed!

The highlight of my race was passing the new National 24 Hour Champion Josh Tostada on my 4th lap. I spotted him a pretty good lead at the start and caught him at the top of the last climb at the last sand pit. We chatted for a while and then I just had to get going - he was going too slow
Posted by Brad Mullen at 1:43 PM 3 comments: