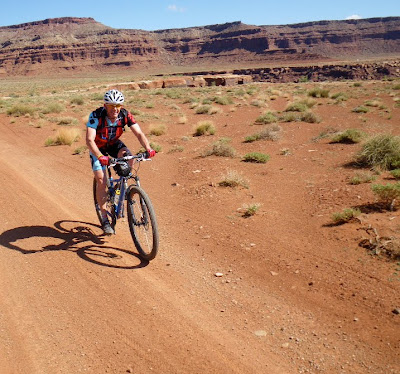 Me, somewhere between Airport and Gooseberry. 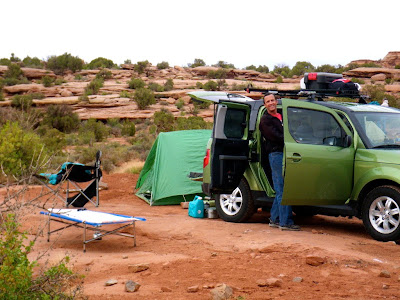 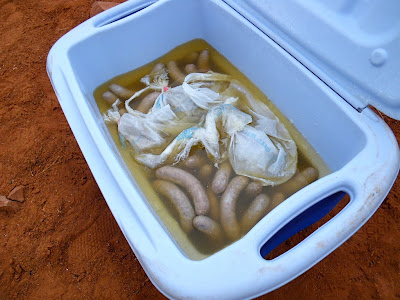 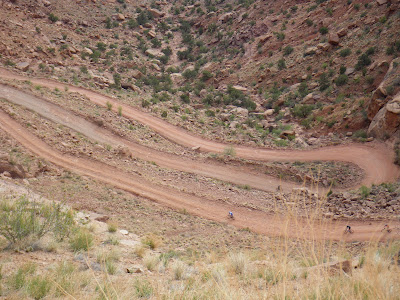 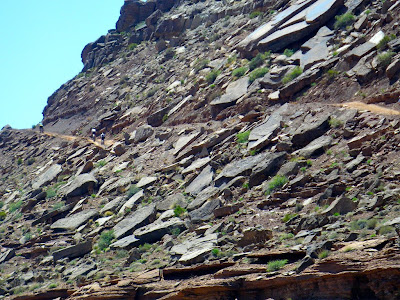 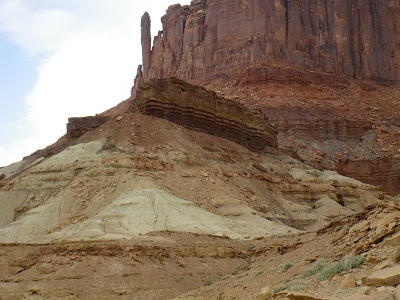 Hardscrabble. If you look real hard you can see cyclists under the dark brown band. 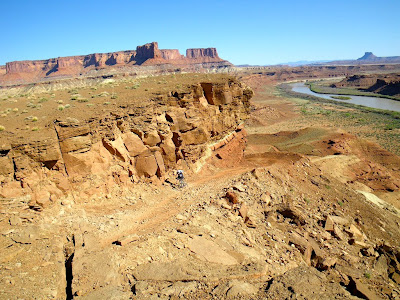 The top of Hardscrabble. Several guys made the climb. Wow!

Much to my surprise, I finished the RAWROD (Ride Around he White Rim in One Day) in fine fashion - on my bike. Before I start, a special thanks goes out to Kenny Jones and Eldon Nelson for getting a great group of riders together for this non-event. You guys create a lot of good memories for a lot of people.

Enough about them, what about me? The RAWROD was divided in to 2 days. The faster Rabbits went out on Friday, self-supported, and the slower Turtle group, of which I was a part, rode on Saturday. Let me tell you, if those guys/gals are Turtles, I'm a snail. My ride time was around 8:45 which seemed quick to me, and I was in the middle of the group. Heather Gilbert did 160 miles between the 2 days, on her Single Speed, and Jileen rode both days! I got to ride with Vets Larry Tucker and Tim Fisher as well as Bill Dark and Canyon Kris Nosac. What a pleasure it is to hang with them.

The day went pretty much as planned; I drank & ate less than I needed and I suffered just the right amount. But I did not cramp and did not walk the climbs I was capable of riding. That means I walked Murphy's and Hardscrabble.

Cleaning Horse Thief was one of my goals. That doesn't seem like a big deal, and typically it's not. But, last fall when I rode with Dwight Hibdon, I bonked at the start of the climb, cramped half way up and had to hobble like I was walking on stilts back to my car. Pathetic! This time I fueled up about 30 minutes before the climb and made it up without an issue. I was tired, but happy because beer and salty potatoes chips welcomed my arrival. Just sitting in my cushy chair, staring at anything and everything was one of life's simple and fulfilling pleasures. I started the day with Bill Dark and Canyon Kris, and that's how it ended - together. Thanks guys.

The only downer on the day was the battery on my new Garmin 705 crapped out at 7:50 riding time and 92.5 miles! It was fun riding with a gps, and playing with it took my mind off what was sometimes monotonous riding. That stretch between Airport and White Crack always tests my commitment and fortitude. It seems to go on forever! The gps was a nice diversion. Don't get me wrong, I love this trail, but the gps mades it more loveable :-)

This was interesting. While I did not check the angle of all the climbs, I did look down on one section of Hardscrabble and it said 27%! Needless to say, I was walking at that point, but others were riding it! Wowzers! Next time I'll have to see what the angle dude says about Murphy's Hogback. I'd love to ride that one, but I think it's out of my league. Maybe Hardscrabble.

I also liked looking at the map to see what was ahead. That provided additional relief and helped pass the time. At one point I said to Bill the Green River was just on the other side of the clif and within seconds, it appeared. Cool!

My other goal was to keep my HR in the 135-140 bpm range. Before the ride I looked at my average HR from past endurance races and it seems to average about 138 (my XC average is 163-165). And my typical race starts out way too fast and ends with my a-- dragging big time. This time I stayed in my prescribed range and actually ended up averaging only 131 bpm. That didn't include the last 45-50 minutes and the Horse Thief climb, so it may have been a beat or 2 higher. I must say though that I'm not real fit right now and my effort was probably the best I could do. But now I'm hopeful for the Point 2 Point race in September. With LW's help, I'll kill it.

The ride ended the way it started. Bill, Canyon Kris and I finished together, the sky was sunny and clear, there was no wind, and everything was still working - both body & bike.

On the way home Bill and I were planning our fall RAWROD, unsupported with Dwight. Life is good!
Posted by Brad Mullen at 9:59 AM 4 comments:

Just a few random photos from some recent rides. Little Creek Mesa is a super fun route south of Gooseberry that I rode after the Cholla Challenge in Hurricane. Kenny Jones was our tour guide and he did a fantastic job. The route has a lot of flow and just feels good. And there are technical sections that even the most skilled would be challenged to clean. I think it's more fun than Goosberry, if that's possible. Another cool feature is the trail follows the cliff edge for a long time and the possibility of taking a life ending fall is real. Kinda makes the butt pucker, in a good way. 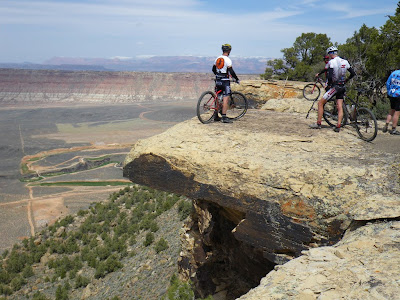 The valley views are off the chart! 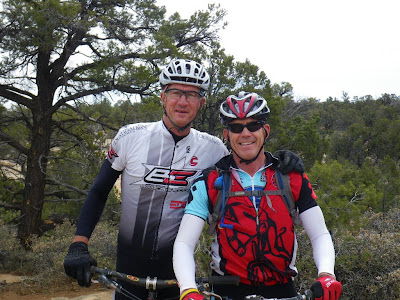 Bob Dawson finally got off the Single Speed Rigid and got some gears. 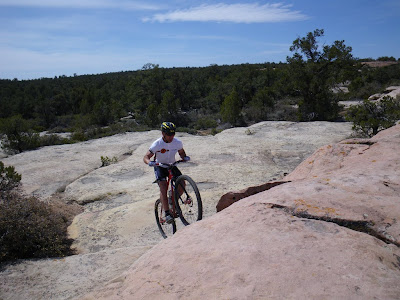 Kenny doing his thing. This is steeper than it looks. 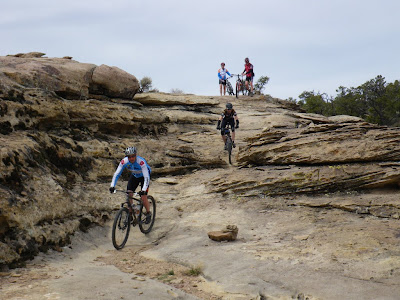 This one was real steep too - it's a double pucker! 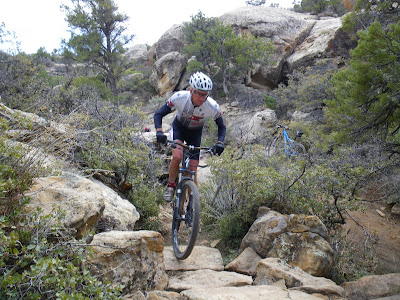 Dawson attempting the crux of the trail. Did he make it? 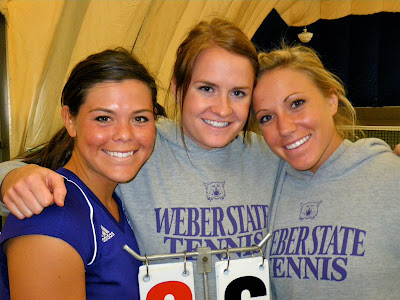 Three of the five graduating seniors on the Weber State University Women's Tennis team. Keya, my daughter MarKay and Alyssia. These girls have had a blast and have lived the college experience to it's fullest. Way to finish strong :-) 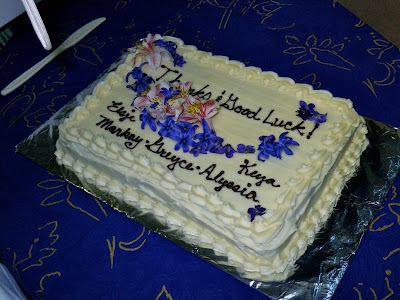 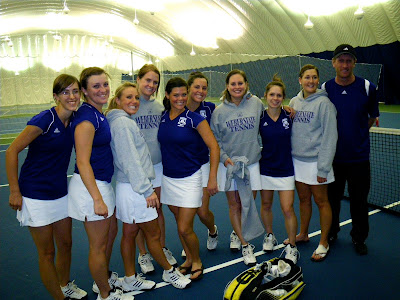 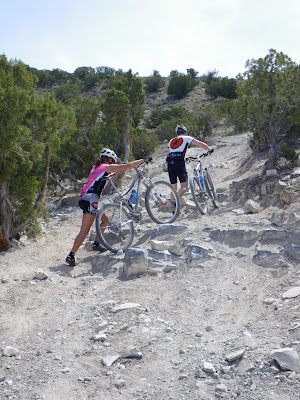 The hike-a-bike section (Yellow Page Hill) of the 5-Mile Pass course. Maybe my memory is failing me but doesn't this look rockier than it was in 2008? That's Brittany and Garrett Kener doing the push. 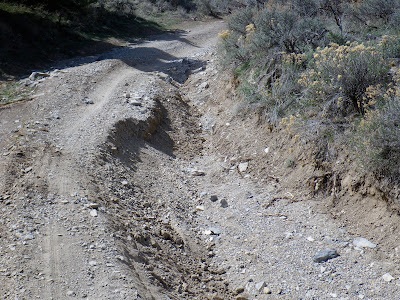 This is on the descent after cresting 7-mile pass. It used to be real fast and smooth but it looks like rain and ATV traffic has dramatically altered the surface. There are 2 short sections like this and lots of fist sized rocks. Bring extra tubes! 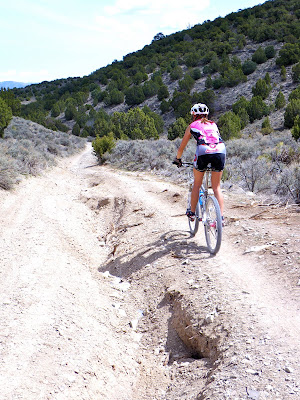 This is the 1st of the two rutted sections.

Gotta get back to work. White Rim in a Day is coming up this weekend so I hope to get some good photos for next week.
Posted by Brad Mullen at 7:03 AM 2 comments:

The second XC race of the 2010 season went better than expected. I finished 1st!

The Cholla Challenge course in Hurricane Utah is a wonderful mix of slick rock, sand, small ledges, gravel flash flood drainages, single track and just a bit of double track. And it's fast. I really like the course cuz it doesn't have any long hard climbs like Solitude, Sundance and Deer Valley. And, we're in the desert, which is where I love to be.

Our race started about 12:45 under an overcast sky, no wind and a comfortable temperature. I think our group had 7 guys toe the start line. We started with the 6 or 7 Clydesdales and I got squashed at the gun when I hit the hard left turn. The dust was flying, visibility was "0" and when it cleared I was next to the last! By the time we hit the slick rock climb I passed everyone but Dwight Hibdon. DH is a great climber so I stayed on his wheel hoping not to get dropped to quickly. We went back and forth keeping the pressure on Joel Quinn who has been riding real strong so far this season. By the 1st rocky descent we had gapped Joel and he was no longer in the mix. DH was setting an excellent pace and I stayed on his wheel the entire 1st lap. I pulled on the single track section heading back to the start-finish line which we crossed together. That felt real good being with him.

Lap 2 was the same as lap 1, for a little while. We headed up the 1st slick rock section together and began the gradual climb before the rocky descent. I had a brain-fart and dipped my wheel in a rock and lost my momentum. That's all DH needed as he slowly pulled away from me. I was working hard to bridge the gap, but I couldn't catch up. And then he put a slow rider between us at the top of the rocky descent, and that opened the gap a little more. Bye-bye DH! Well, to my surprise DH got a flat at the bottom of the rocky descent, and, he didn't have a spare tube!!! Shame on you Dwight. I offered him my spare and after 1st refusing, he said ok, give it to me. So I did and off I sped. I don't like to take advantage of a distressed rider, but I did anyway. I put the pedal to the metal and pushed hard knowing he'd fix that flat in 2 minutes and run me down. And I didn't want that since I was a good samaritan and all that.

Needless to say, DH didn't catch me. In fact, he didn't catch anyone. Ya see, the tube I gave him, the lightweight one I've been racing with for several years, had a hole in it! Poor DH :-( And he wasted a Big Air trying to blow up my gift tube. So I was actually a double-winner. I won the race and, now I know I need to patch my spare race tube. Sorry Dwight. But seriously, if he hadn't flatted I wouldn't have caught him. He's strong and fast and the real class of the group. I really enjoyed staying with him as long as I did and hope I can do it again. He and Roger deserve some competition.

I'm certain DH will get the last laugh and beat me every time we race from hear on out. But at least I got him once this season! And I'm gonna be careful accepting a "gift" from him during a race.

All in all, it was a great weekend that was capped off with a Saturday afternoon ride on the 25-Hours of Frog Hollow course, a kegger at Gooseberry Mesa, and a Sunday ride on Little Creek Mesa. Ya can't ask for much more than that. Life is gooooood!
Posted by Brad Mullen at 5:41 PM 1 comment: