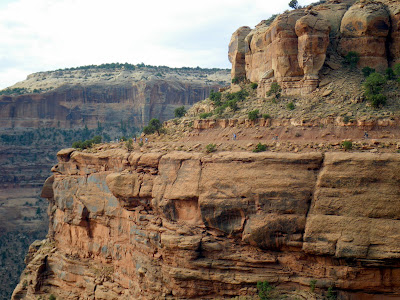 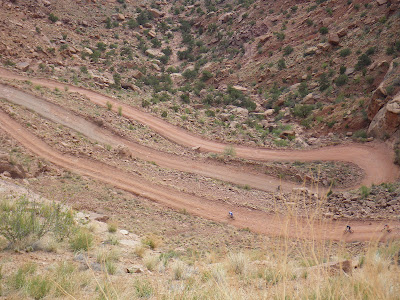 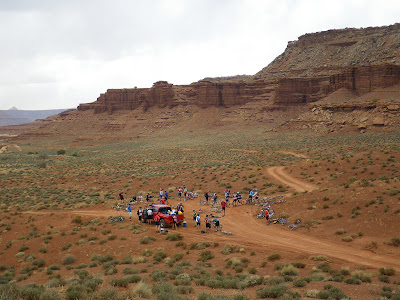 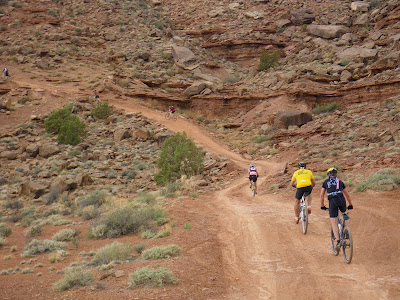 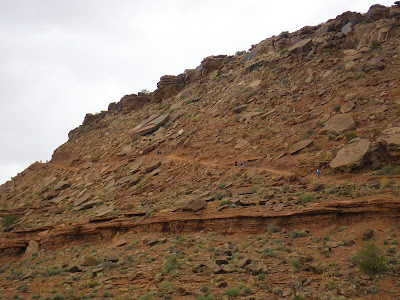 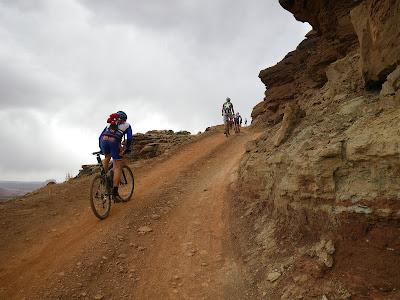 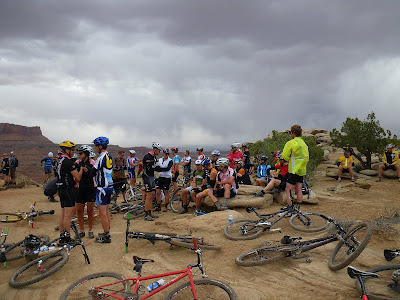 Top of Murphy's Hogback with storm in the background. 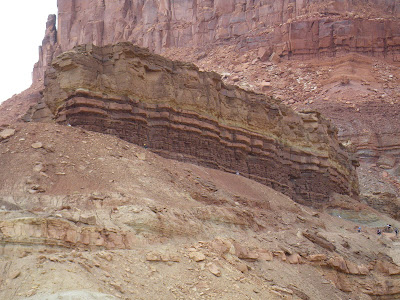 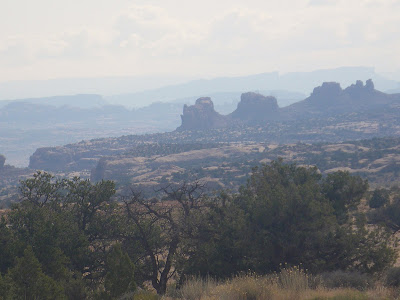 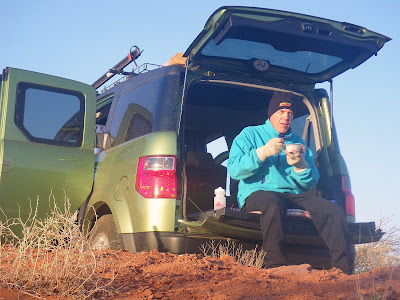 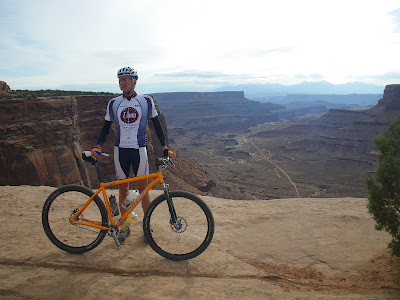 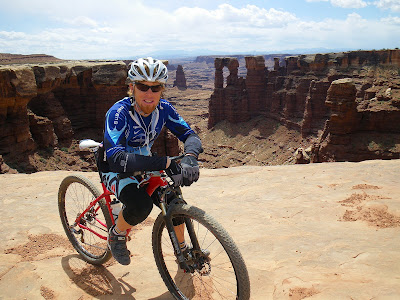 
After hearing so much about the RAWROD (Ride Around the White Rim in One Day) I decided to give it a go, and I'm glad I did. It is so incredibly electric being around a fantastic bunch of motivated and positive people that you're inspied to push beyond your expectations. With a little less wind, it would have been perfect.

I got to the top of Horsethief Canyon Friday around 5 pm and parked the Element near the brat & beer pit and set up camp. The weather was perfect and the brats Fatty cooked were off the chart. Kenny Jones did a fanstatic job hooking up the group and making the weekend memorable. Thanks Kenny.

Sleeping Friday night was difficult at best. Since my only long ride since last fall and prior to the knee fix was a 4 hour, zone 1, flat road ride I wasn't sure the WR in 1 day was a wise endeavor. But, what the hell. I decided to go for it and see how far I could go. Long story short, we rode clockwise and I finished it without injury or mishaps in 9:21 riding time. I'm way pleased with that time since the wind was a monster and fought us all the way. I was hoping for 10-11 hours.

As I mentioned, the wind was the enemy all day and it seemed it blew for all but an hour, and almost always in our face. I bet it was mostly 20 mph and peaked around 40"! The traditonal tailwind after White Crack never materialized so the battle with the headwind raged on, and on, and on ... At one point between Murphys's and Candlestick it was a whiteout with the wind blowing so hard I thought for sure my frame was going to look like it was sand blasted. It was impossible to ride a straight line and I was blown off the road twice that I remember. I wish I had a picture but I didn't want to stop cuz I didn't think I'd be able to start again. It was that fierce!

Back to the ride, I walked Murphy's and Hardscrabble knowing if I tried to ride either, that would be the end of the day for me. Good call Brad. There were a lot of single speeders and quite a few with rigid forks (WTG Bob Dawson!). The SSer's seemed to do better on the steep climbs and were very inspiring to watch. The top of Murphy's is a great place to "rider watch" with everyone cheering the dudes and dudettes that pull off the impossible. Hardscrabble is different and harder overall due to it's steepness and loose surface. Both are great places to practice your hike-a-bike technique.

The icing on the cake, so to speak, is the climb out Horsethief Canyon. Camp is only about 1.5 miles away, but looking at the "wall" is daunting, especially with 8.5 hour plus in the legs. One guy offered $100 to anyone that would bring his car down to him! He ended up riding it himself and was glad he did. I push granny for all but maybe 2 minutes and made the top in 25 minnutes! I was gassed and wanted to quite several times but people were gathered at the top cheering us on so quiting was not an option. The other thing that got me to the top was the sugar drenched cinnamon twist donut that was happily waiting for me in the car. I was craving that donut so badly I was creeping myself out! I could not wait to attack it. And I did so with pleasure, and it did not let me down :-)

After about 20 minutes I got my body and head together and said goodbye to everyone but Bob Dawson and his buddy Mark. The 3 of us stayed the night at the scene of the prior nights feast. We swapped stories for hours, drank a few beers and ate sausage and eggs prepared by Chef Bob, and slept like babies. We were treated to a starry night with no wind whatsoever and an equally windless Sunday morning. It was the perfect end to a most excellent weekend. Thanks again Kenny.
Posted by Brad Mullen at 4:22 PM 5 comments:

I don't need a helmet 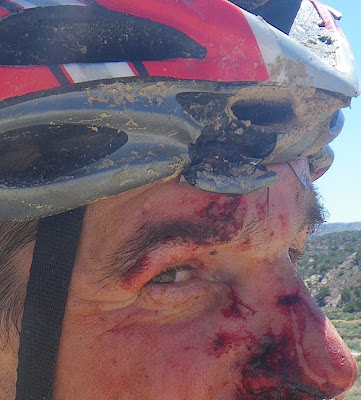 Rob Westerman took a header on a rocky descent during the Mountain States XC race in Fruita Colorado last weekend. 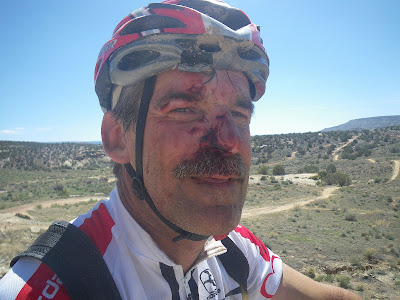 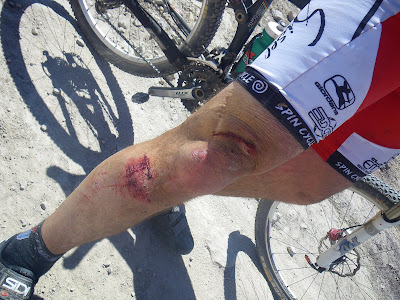 Rob also damaged his leg that still has 16 screws in it from a Deer Valley mishap 2 years ago. 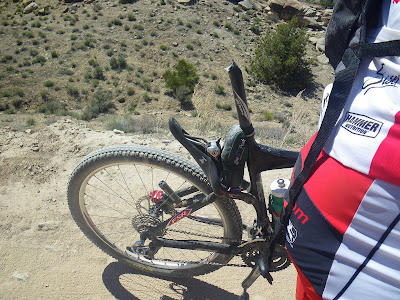 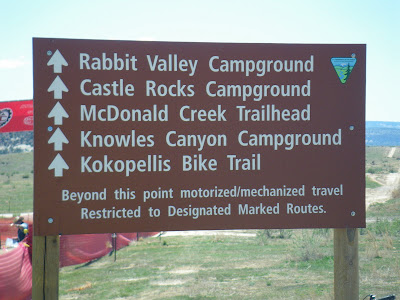 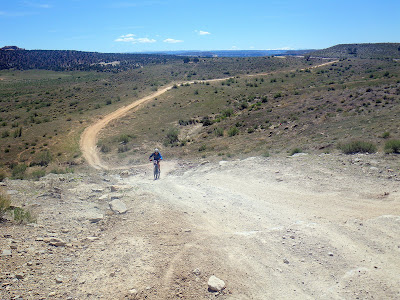 Chris on the last climb of the day. 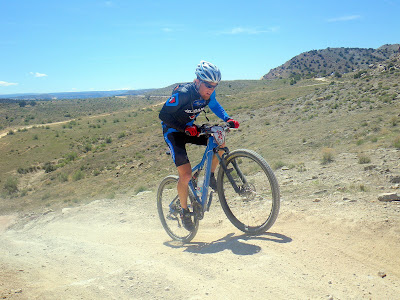 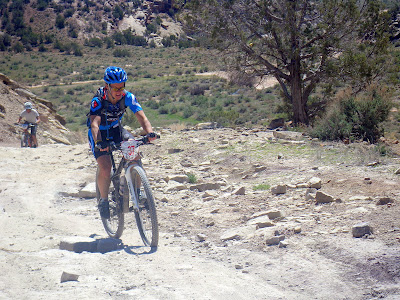 KC demonstrating the Holley climbing power the family is known for. 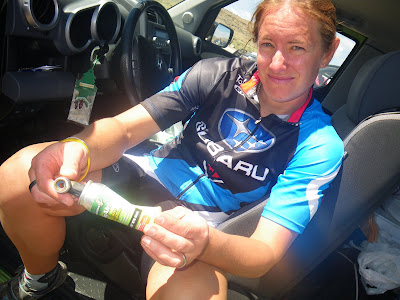 KC the canister crusher. Don't even try to pat her on the back, unless you want to damage your hand. Talk about tough! 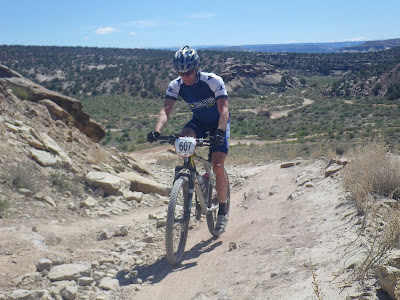 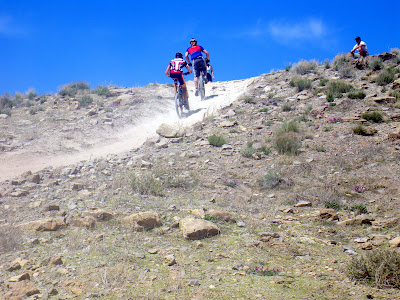 Carson climbing the last hill. This puppy was steep.
Posted by Brad Mullen at 8:02 AM No comments: 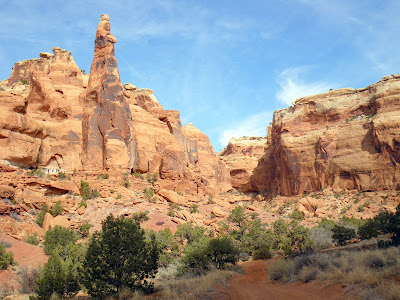 The Bride is located in the side canyon on Gemini Bridges Road before the Gold Bar junction. It's a worthwhile 15 minute side trip. There are 5 primitive camp sites in the canyon and you must bring your own water and potty. 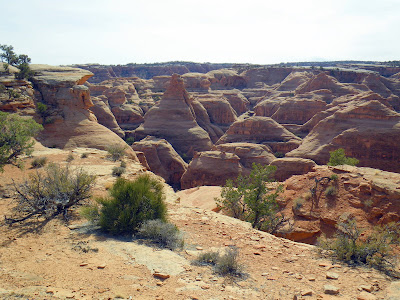 I just thought these were cool. They're on the south side of Gemini Bridges. 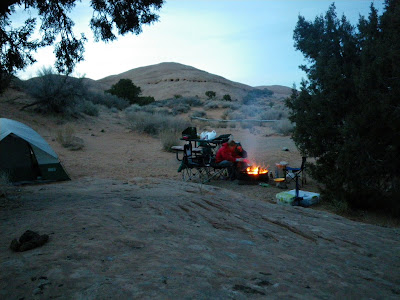 Isn't camping what Moab's all about? Chris and KC were huddled over the fire cooking Brats and keeping warm. Believe it or not, it was dark when I took this pic. We camped in the main campground just before the Slickrock parking lot, spot #18. 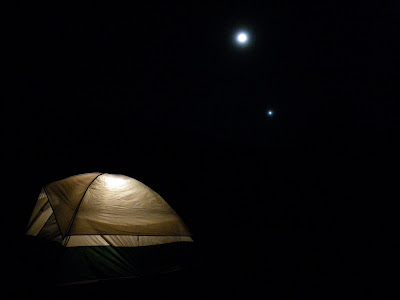 I took this pic of the moon and ? shortly after I took the one above. Pretty neat. 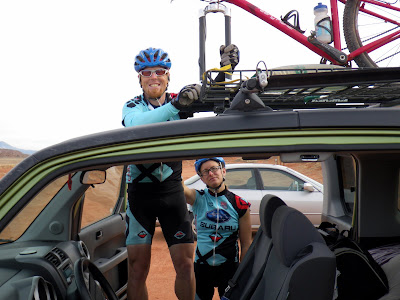 
Work has slowed to a managable pace so I have time to throw in a few pictures from a trip to Moab Chris, KC and I took in late February. As I recall the weather was prefect and nobody was there - it was dead! On Sunday morning, the parking lot at the Slickrock Trail was totally empty! How did we get so lucky? We split up and I rode Soverign, Gemini Bridges, Bar B, Circle O and Rockin A while the Holley's rode Amasa Back, Soverign, Bar B and anything else they could find. We camped under clear starry skies and slept like babies. I've got to get back down there, and soon.

My conditioning is bad but I am riding again. I've had a few knee setbacks but I'm heading in the right direction. I just have to reset my expectations and enjoy the race season and my biking friends. This should be a fun year.

Enjoy the pics.
Posted by Brad Mullen at 8:09 AM No comments: