It's been a while since I've posted cuz LW's Leadville training program has me on the road alot which leaves little time for writing. But, today is a good day and I'm going to toot my horn a little. 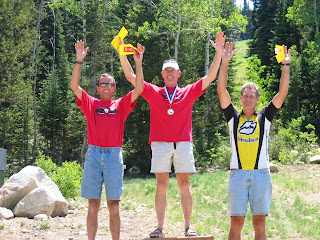 The State XC Championships were held at Solitude this morning and I won my division. Yahoo... I was a little apprehensive at the start cuz I just finished a big 3 week block with lots of intervals and 9-12 hours per week, so I was less than fresh. As I look back, every time I'm anxious at the start of a race, it turns out favorably in my direction. I have to say, I felt great today. My legs felt strong on the climbs, I did not cramp, I did not crash (like I did on Thursday's pre-ride), I was a little slow on the descents and my attitude was positive. I held back after topping out on the 2nd lap cuz I couldn't see anyone behind me and didn't want to blow it by crashing or doing something stupid. And, true to past performances, I only drank about 1/2 of a small water bottle in 1:16, but it didn't seem to have an adverse effect. I've got to get this drinking thing figured out on short races. Long races aren't a problem, just the <2 hour ones.

Ed had us old guys start about 5th from the pros, instead of near the back of the pack like usual, so I had a chance to race with some fast ombres. I caught Roger Gillespie at the top of the long climb on the first lap. He was having a bad day and bailed shortly after that with a mechanical. Actually, he was probably embarassed I passed him, and that did him in. I caught pro chick Roxann Tolly at the start of the 2nd lap and rode with her and some other chick for the rest of the Serenity Loop, after which we parted ways. Keith Payne (3rd place in 40 Sport) and his fast group of 3 passed me at the end of the 2nd lap as we crossed the ski run just before the pavement and "s" turns, so that made me feel good to stay in front of him that long. KC never caught me (she started ahead of me and I was off the course before she reved it up). If I would of ridden one more lap, she would have chicked me too. Chris Holley had a good race but decided to eat dirt a couple of times and that did not play into his plans. KC & I forgot to send him the memo that we were going to win our divisions on Saturday. Chris finished 5th in a strong pro division.

Team Mad Dog had a good day winning 6 individual Championships, the most of any ICUP team, with many others finishing on the podium. We may not be the biggest team in the ICUP series, but man-for-man, and chick-for-chick, we kick ass.

I had some fun before and after the race cruising around the venue on my 1982 Specialized Stump Jumper. To my surprise, it was a big hit. It was more comfortable than I thought (it has a really long wheel base - kind of like a limo), but I can't imagine how I rode that thing on the Slick Rock and White Rim trails way back when. Maybe I'll get the guts to take it out on the local trails again, for old times sake. No, I think I protect the 20+ year old tires and stay in the parking lot. 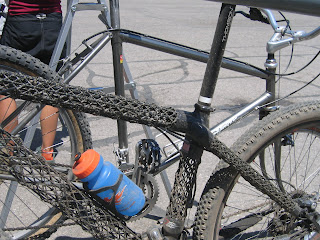 Karl's 2008 Arantix with my 1982 Stumpie in the back ground. My Stumpie has superior rear wheel mud clearance and a much safer stem. What a difference 26 years makes.

So, now it's on to a well deserved recovery week and the Park City Perfect 10 next Saturday. The Leadville 100 is 5 weeks away and it looks like everything is coming together nicely. I think all those hard Moab rides with Chris and KC, combined LW's 100 PR program are a good potion for me. Stay tuned. 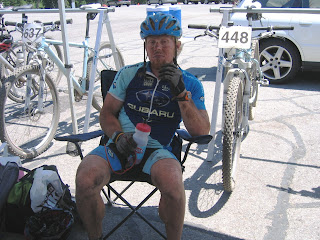 Chris takes dirt to the next level. There was more on him than there was on his bike. 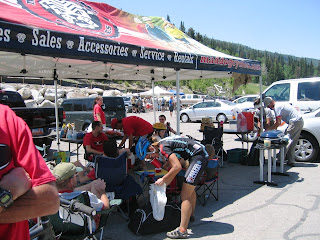 Mad Dog put on a feast for the team and families after the race. 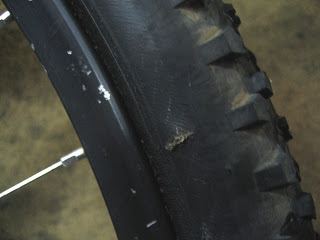 I found this tear in my rear wheel after the race. Wow, am I lucky, or what!
Posted by Brad Mullen at 5:15 PM

Now I can say all casual like in conversation that "I know Brad Mullen" !

Nice riding. Sure is fun seeing you get faster every year.

There ya go Dave.

You rock Brad! Good luck Sat. at the P10. Wish I could come do that one.