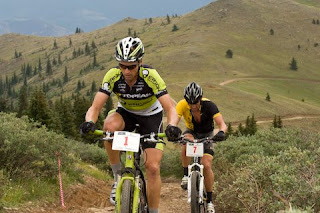 Lance and Dave heading up Columbine. Photo by www.robodeaphotography.com.

I just remembered that I met my 2nd goal for the race which was to not end up in the oxygen tent afterwards. That felt really good, and it's far less embarassing.

Check out this cool video of the race. It's better than reading what follows.

So the race started at 6:30 and we staged our bikes at 5:45 which was too late. It took KC and me 30+ seconds to get to the start line after the gun went off. The 1st 4 miles is neutral and exciting because of the huge group of riders and all the cheering people along 6th Street. The race offically begins at the dirt road, but for KC and me it stopped because of the "people jam" at the turn. The pace picked up along the flat dirt road to the St. Kevins climb and I passed quite a few riders before beginning the climb. I passed a bunch more guys on the climb and kept near KC and Stuart Edgerly (he's a 10 time Leadville finisher and 24 hours of Moab teammate) for motivation and speed. After topping out on St. Kevin's I exited the single track and hit the pavement just behind KC and quickly found a bunch of speed. My speed toped out at 41.4 mph and it felt sooo good. 40+ is real sweet on fat tires. Once the road pitched upward, KC blew past me and set a target for me to follow. That was a mistake on my part. As we climbed up Sugarloaf I got occasional glimpses of KC so I knew my pace was aggressive, maybe to much so. Since I wasn't to far behind her at the top of Sugarloaf, I thought I might be able to catch her on the descent down the Pipline Trail. Not a chance - she was gone! I never saw her again until she came down from Columbine Mine.

By this time I knew I was pushing past my comfort zone but thought I'd keep it up to see what I was made of. Well, it turns out I'm made of mush.

After the Powerline descent we hit the pavement for a few miles of road work to the Pipeline feed zone. One group of about 6 guys passed me and I was not able to hang on. I knew right then that it was going to be a tough day. I eventually caught a tandem with 4 or 5 other riders and followed them into the Pipeline FZ which I bypassed and headed off to Twin Lakes about 50 minutes away. Shortly after the PL FZ I saw a rider on the ground with a bleeding head being attended to by 4-5 riders. I don't know what the outcome was but I'm sure his day was done. The Pipeline to Twin Lakes leg is pretty bland with nothing exciting or challenging so getting through it is no big deal.

Twin Lakes is real exciting with hundreds of people, a dam that only the riders can cross, and the it's the gateway to the 3,200 foot 10 mile Columbine Mine climb to the 12,600 foot high point of the race. I made a quick stop for water bottles and Blocs and headed out for what turned out to be a better experience than last year. I kept a steady pace up the gravel road and began walking at the cable car tower. I kept up with a chick that was riding so I knew I was doing OK. She crapped out and I walked past her and probably 20 other people! Wow, what a difference a year makes. Last year this was a death march, this year it was a hard effort, but it never brought me to a stop or got the best of me. Well, that's not exactly true. I did start to cramp just after the 3rd hike-a-bike and stopped for a minute or two to take 2 e-lytes and water, and I was back on my way and road to the Columbine FZ without any further issues. I made a quick grab of food and water at the FZ and headed back down in real short order. The objective was to get off the summit as fast as possible and get down to thicker air. Mission accomplished.

I almost forgot to mention Lance and Dave Weins were coming down the Columbine road at breakneck speed at 10:25 am while I was still climbing and probably 1:15 from topping out! Later I found out they stayed on their bikes and climbed the last 1.5 miles to the summit. Most mortals do 2 to 3 long hike-a-bikes going up to 12,600. Amazing!

Back to me. My descent down Columbine was controlled, but fast, and I passed several riders on the way back to the flat road. Here's where the doubt started to creep back in again. Two guys I blew by on the descent passed me and I couldn't hang with them. That was not the case last year - I was passing people at this point. But this time, I had no go juice. Crap! I made it back to Twin Lakes and fueled up and headed out to Pipeline 2. This section starts with a road climb that gets your attention right away, especially if you stopped at the FZ and let your legs cool down. About half way into this leg are two more killer hike-a-bikes, even for Lance and Dave. A guy passed me on the trail just before the 2nd climb and started pushing his bike up the hill. After just a few steps he just sat down in the dirt - he was cooked! I didn't look back to see if he got up cuz I didn't want to know. I finished the leg and stopped at Pipeline 2 for a Red Bull and fuel for the final 2:45 (I hoped) back to the finish line.

This leg begins with a asphalt/gravel road ride into the wind, past the Fish Hatchery, across a shallow creek and on to the vaunted Powerline climb. This is the part I was dreading most, especially since my mojo was not flowing. It went well cuz I walked the steep section and, to my surprise, I cleaned the rest of the climb. I have to admit there were 3 or 4 times I almost got off my bike and pushed, but a little voice in my head said kept saying stay on the bike and salvage some sense of honor. As I topped out on Sugarloaf it began to drizzle. By the time I hit the dirt road it was coming down steadily. I kept pushing on but it got colder when the small hale got mixed in with the rain. By the time I hit the asphalt it was an aggressive downpour that forced me to stop under a tree to begin my fight with a rain bag that was to fit over my torso. The yellow plastic bag (call it the big target, or better yet, the parachute) was all stuck together and I couldn't tell where the holes were or how to put it on. It was actually quite comical and I'm glad nobody was their to witness the mess. The bag was marginally effective, but it did keep my core warm until the last 20 minutes, so it did do it's job.

I pressed on as the pavement headed up and the rain kept coming down. I got passed by quite a few guys who looked real fresh. The bummer with this section is this is where I was blowing by people last year! Damn, that was discouraging. I finally reached the neutral aid station and hooked up with Mike whom I had been changing leads with since 30 minutes before the Pipeline FZ. We got some food from the volunteers and I said to him we weren't going to make it under 10 hours. He said lets just have fun and enjoy the trail. SO, we headed up to St. Kevin's with rain pelting my yellow baggie, muddy water running down the trail dodging large water puddles that did not reveal their depth until it was too late. The going was slow but we kept the pedal down and descended in one piece. Mike was actually way ahead of me at this point so I expected to come in by myself. Two guys caught me on the flat road and wanted to work with me, but I had nothing left so I said go on without me. They did and to my surprise, I caught them at the last rocky climb at the start of the Boulevard, and I saw Mike in the near distance. It took me a few miles but I caught Mike just before the pavement and lead him to the finish line where he sprinted past me. Good for him, he rode strong and deserved the win.

At the finish I was given my finishers medal and headed to the aid tent for soda, brownies, soup and cookies instead of oxygen and doctors like last year. Ellen, Rob, Ryan, Lia, Chris and KC greeted me at the finish putting a nice touch on a challenging day.

In spite of the challenges, I already looking forward to next year and going after the 10 year finishers buckle in 2016.

Next year I'll make my time goal more realistic, I'll ride my pace, I'll drink a lot more water and I'll finish strong - the opposite of this year. This is a great race and an exciting challenge that hits my fun button and I don't want it to stop. I hope I get in again so I can continue to push myself, get faster and solidify my place in the Leadville family.

I'll put some comparison numbers to together in another shorter post.
Posted by Brad Mullen at 7:18 PM

Glad you said ol' instead of that other word ;-) Thanks for the hat's off...