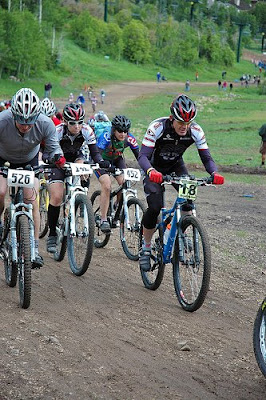 Early on, Saturday looked to be a warmer repeat of the 2008 race with the possibility of rain and mud fouling up what's always a beautiful, fun course. Five minutes before the start it started to drizzle and a minute later, it was done. The race went on under perfect conditions and nobody went home dissapointed.

My race went better than expected since I won. I've won on this course before, but the 6-7 minute climb up Little Stick just kills me. And we had to do it twice - I know, the pros and most other riders do it 3 or 4 times, so stop crying. The funny thing about this race is within 2-3 minutes of the start, I was seriously thinking about stopping and riding back down the hill to my car. I didn't get a good warmup and felt like crap. Poor warmups seem to be my logo this year. And the thought of doing this daunting climb 2x was more than I could handle. Somehow, I convinced myself to hang in there, and I got the job done.

Joel Quinn got a jump out of the gate and lead our group up Little Stick. Poor ole Jim Westenskow dropped a chain right after the start and it took him about 5 minutes to get it out of his spokes and operating again. That was the end of his race, but he still finished 4th. I got behind a freight train after cresting LS and made a couple of dicey passes, but Joel was gone. Then on the fun swoopy single track throught he woods we got behind another slow group of 4-5 riders that were timid in letting us pass and when we finally did, we put the hammer down. When we got to the clearing, to my surprise, I saw Joel and got excited again. I caught him pretty quickly & stayed on his wheel for a few minutes and passed him as he struggled making a sharp left hand corner in the woods before the pavement. I decided to up the pace a little and cooked it nicely down the rocky single track off the summit. I looked back at the corners and he was nowhere in sight.

After finishing the first lap the 2nd time, climbing LS was a little better. I heard Lew's name called out by Ed and he was about 1:15 behind me. I figured he passed Joel and was in 2nd now so he was my competition. I found my groove climbing LS and figured if I was hurting this bad, they were going to have to hurt more to catch me, and I was betting they didn't want to do that. I crested the 2nd time and headed to the descending single track knowing I just had to stay upright and the race was mine. I backed it down a little so as not to make a dumb mistake and took it home to an uneventful 1st place finish, or so I thought. To my surprise, Joel got to the finish line 1st, and I never saw him pass me! Ed had him 25 seconds ahead of me and I knew immediately what had happened. I talked to Joel and sure enough, he missed the turn at the end of the first lap and did not come down through the start/finish before beginning his 2nd lap. Joel and Lew worked it out where Joel bumped down to 2nd and Lew stayed in 3rd - that was gratious of Lew. Ed put Joel 2 seconds behind me. It was a good race and fun day, and nobody got hurt.

My conditioning is improving weekly and my spirits are high. My delemia now is since I've got 2 firsts and 2 seconds in my group, do I bump up to the 50+ open group and get my ass kicked and confidence shattered, or do I stay for 1 or 2 more races. I'm starting to feel bad for the guys in my group that work hard but are denied a podium shot cuz there are 4 of us that dominate. Maybe one less dominating racer would be good, and humble pie might make me more hungry (I'm not feeling stuffed though, so why would I do that?). Chances are I'm done with the XC for the season since Leadville is only 2 months away and I need to focus more on that. So, that makes moving up a mute point. We'll see. I sure like winning and that's tough to walk away from.

The weather gods looked on me favorably Sunday too. I did a 5 hour road bike ride and as I rode my bike up my driveway at the finish, the skies opened up big time! Talk about perfect timing. I just started to laugh as I stood in the living room looking out the window as water rushed down the gutter. This was definatley my weekend :-)

Why would I want to change anything!
Posted by Brad Mullen at 7:55 AM

I think there were a few people that did that. I am pretty sure one guy in my group did it, as I was heading up LS the second time I was alone, and then after a it of cross traffic where the singletrack crosses it I had someone right in front of me heading up the climb.

Nice race. That course was a lot of fun.