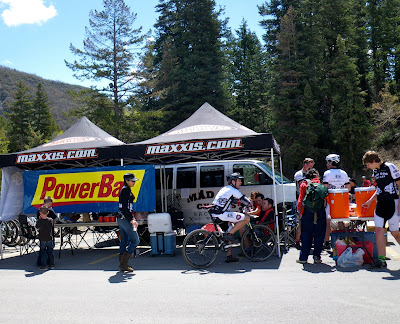 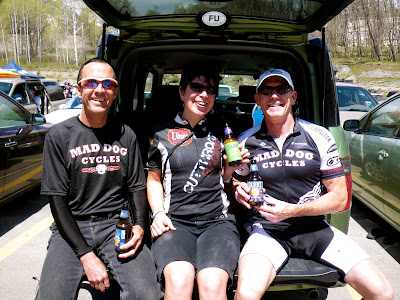 Bill Dark, Cutthroat Ali and me enjoying a delicious, ice cold Pale Ale recovery brew after the race. This is a very important step in the guidebook to successful MTB racing. Thanks Uinta Brewing Company. 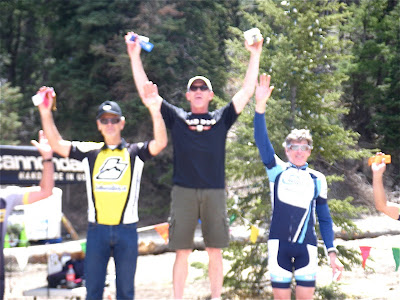 The podium boys. My photographer had one too many recovery brews! 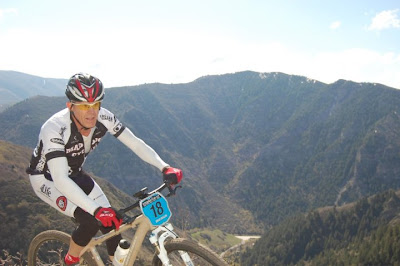 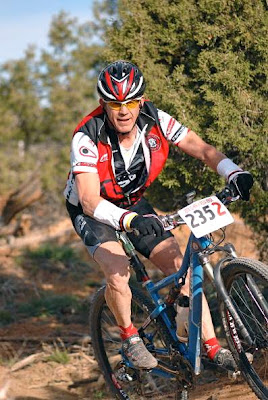 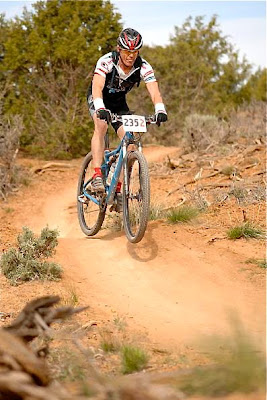 Sticking your tongue out is critical when jumping a small bump. Highly effective - I landed it.

Today was a perfect day for racing - cool temp, clear sky, no wind and a moist tacky course. This was the 4th race in the 13 race series, and our first in the mountains. With the fast desert courses behind us, now the pain begins as we hit the ski resorts where the climbing gets much more serious.

I had the misfortune last weekend at Mesa Verde of blowing up the seals in my Reba fork to where the fork was rigid for 2 1/2 laps! Yikes!!! I had no compression whatsoever and got the crap kicked out of me for half the day. I took it to Bingham's in downtown SLC and am awaiting it's new replacement. Thanks Jared for pulling the right strings on that one. In the meantime, I'm riding my Gary Fisher Rig 29er Single Speed and that's what I raced on today.

The initial climb up the pavement went off as usual. Joel Quinn took off like a rocket, and I followed. Usually Bill Dark is up there too, but he took it easy today. I stayed on Joel's wheel to the end of the pavement then moved to the front before we hit the single track. Joel, Bill Peterson and Dark were on my tail as we headed through the trees and winding trail that dropped off very steeply on our left side. I'd hate to fall off that one - Ouch, or worse! I was working my ass off trying to gap the boys, but they wouldn't give in. I was hoping to have a pretty good lead going in to the steep climbs but they were still there.

When the trail headed up, I had no choice but to go hard. Anything less and my bike would come to a halt. That's the beauty and pain of the single speed. It's everything or nothing. I still couldn't shake them by the time we hit the steep double track and thought maybe this was going to be the end of me. I was hurting and the trail was getting steeper. I pushed as hard as I could and then hopped off and ran the final 50-75 feet. My legs were toast! I looked back and Joel and Bill Peterson were less than 50 yards back and there was a lot of hard climbing ahead. Oh boy, I'm in a race now. I didn't look back and just put the pedal to the metal and blasted through the tight S turns and remaining climbs. Somehow, I managed to stay ahead of them when we topped out and I opened a decent gap on the descent. I climbed the pavement the 2nd time and thought for sure they were on my tail so I turned myself inside-out to stay ahead. I kept pushing and looked back at the top of the climb and nobody was in sight. Nice. Now just keep it together on the descent and climb the pavement one more time and I get the glory (hahaha). I did just that and won by a little less than 3 minutes.

This was a fun race that challenged me and pushed my fitness and confidence to a higher level. I didn't think I could pull the win off and was very pleased I did. As always, I race with a fun and competitive group of guys so any podium place is more than welcome. And afterwards we share a brew of two and swap stories. I love this sport. Life is Good!
Posted by Brad Mullen at 8:05 PM

Nice! Way to hammer the SS!

Well done. I think the SS can push you on that course in ways a geared can't. Great mental toughness to dole out your effort appropriately for the win.