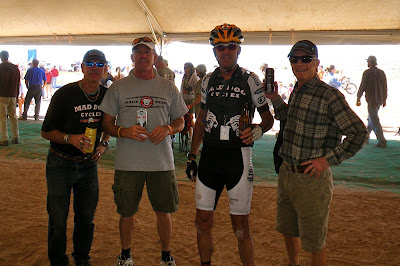 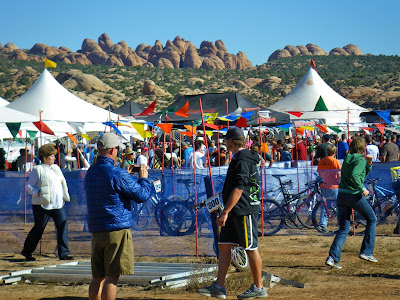 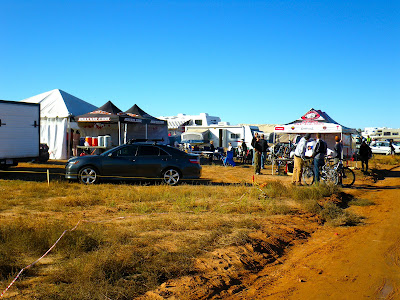 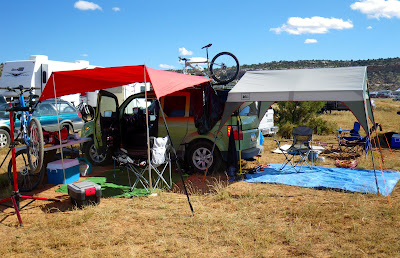 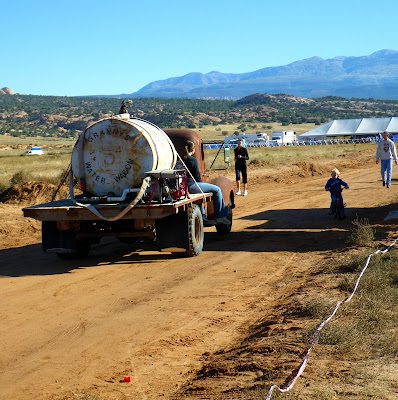 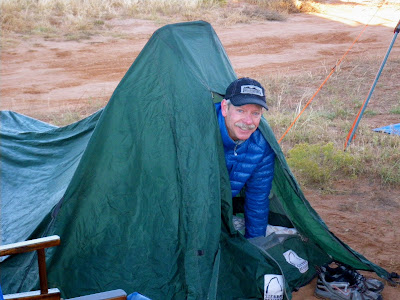 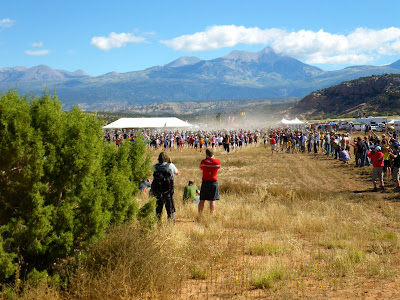 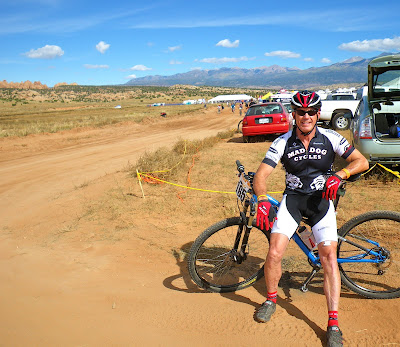 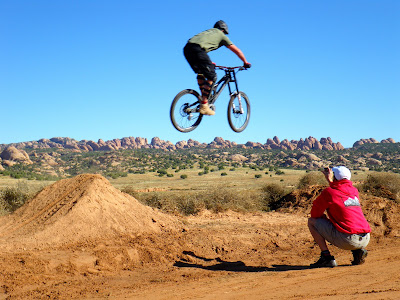 Just a few jumps to get warmed up. That's Keith taking pics. 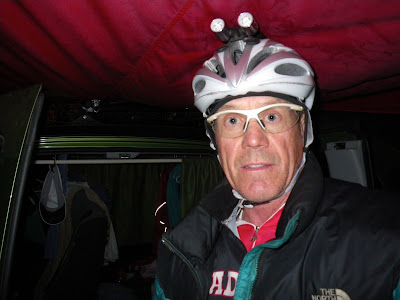 Check out this link for professional pics of the race - click here. Lots of good "on course" shots.

Another one is in the books, and by all accounts, it was a huge success.

Our Team, Mad Dog 4-Dog Night, pulled off a Division record 17 laps in 24 hours 41 minutes and 18 seconds. We even finish ahead of the 4-Women Pro Team Division winner and wound up in 71st place overall. Last year we put down 16 laps and finished 72nd overall, so the riders this year were faster than in 2009.

Team Captain Bill Dark had one of his most consistent performances in recent years and rode the record 17th lap in a speedy 1:26 which just put us ahead of some 30-something hot shots.

Craig Williams was the new youngster ringer we recruited to the team, and he did not disappoint. He was a low-maintenance, consistent and reliable mate that was fun in camp. On the negative side though, he took a nasty crashed part way through his 3rd lap, broke a rib, and broke his 2 hour old, brand new Light & Motion Seca 1400 and rode much of the lap without it. He came out for a 4th lap and turned a 1:31. Wow!

Dwight Hibdon put down 2 sub-1:20 laps and was very instrumental in our achieving 17 laps. Dwight's become a good friend and mentor and I've enjoyed several fun trips with him. We have plans for 2011 so be ready for some fireworks.

As for my race, I am very happy with it. I felt steady and rode the best I have in 4-5 years. I picked really good lines and found a few new ones. My Ay-Up lights did not let me down and I highly recommend you give them a look-see if you're in the light buying mood.

My 1st lap was uneventful and came in under 1:18. The 2nd lap was a little different. Dinner was late so I just snacked and ate a PB&J before my ride. This was my 1st of 2 night laps so I was a little anxious anticipating how the AY-Ups would perform. I pushed myself early, but not hard enough to blow up, or so I thought. At about 50 minutes I started feeling pre-cramp twitches and went for the E-lyte caps. I was riding with a Camelback and was way behind on my hydration and it was beginning to catch up to me. As soon as I began the climb on the back side of the Butte the full blown cramps hit, both legs. I popped a few more E-lytes and was able to get things under control by the time I finished the climb. My descent down the road was fast and I passed quite a few riders. That felt real good.

Lap 3 came at 3:00am and it was cold. I backed down the pace cuz I just wasn't feeling it and all I wanted to do was get in under 1:35. All was well until I burped my front tire descending a steep ledge and went over the bars. I landed on my feet and didn't get hurt at all. My gps got scratched and my tire had about 5 psi left in it. I fumbled around with cold, gloved fingers and found my CO2 and got back on the bike in 3 or 4 minutes. I wasn't very efficient and was in a little bit of a mental fog. After that I was a little conservative for a while but got back up to pace rather quickly.

While prepping for lap 4 I discovered that I blew my rear shock somewhere on the 3rd lap. It would not hold even 1 molecule of air! Yikes, now what? Oh yeah, I brought my single-speed in case the opportunity arose to ride it BEFORE the race started. Well, now I get to ride it DURING the race! Yikes again. I went out conservatively not knowing what to expect, other than pain, and I found out as soon as i hit the pave'. Those rock beat the crap out of me and by the time I got to the tilting slab an about 1.5 miles, I was hammered. I still had 13.5 miles to go and I was dead already!

I found some relief on the dirt heading to "The Left" turn and found even more when I caught up to Heather Gilbert. Heather knocked it out of the park at the Park City Point-2-Point race and I know she is strong both physically and mentally. And, she's a top notch single-speeder so she's been there before. As we were pushing out bikes up the insanely steep, sandy hike-a-bike, I looked at her and said I was done - no mas - I'm toast - I hate this - I want to quit - I'm such an idiot to do this, etc. She said something that must have inspired, but I can't remember what it was. We continued on and went back and forth for the next 30 minutes or so when she pulled away from me on the flat stretch to the Butte. I finally caught up to her at the top of the last climb, at the sand pit before the slick rock slab, and she immediately pulled away on the flat road and descent back to the exchange tent. Without her, I may well still be out there - lol.

Lap 4 came in just under 1:30 and I was pleasantly surprised, and relieved it was over. As for the future, I don't think they'll be anymore single-speed 24 Hours of Moab laps on these legs. My hats off to those of you that put down multiple laps on those brutes. Amazing!

Like always, this post was too long. Sorry. It'll give my wife something to read at my funeral.
Posted by Brad Mullen at 4:54 PM

I know you are pretty happy with your Ay Yups, they are cool little lights. If you feel like you may like a little more firepower from your lights (and have the company there to support your team) at next year's Moab race let me know. We have a racer sponsorship program that might be perfect for you and your team.

Congrats to you guys on the race and beating those super fast Pro women! I look forward to next years race! Let me know if we can help you guys out.

The three slots provided in the feeder cone are for feed levels. In chicks stage egg incubatorthe feed level should be maximum and minimum in growing stage.

Breakers are usually arranged in two columns. In a US-style board, breaker positions are numbered left-to-right, along non sparking tools suppliereach row from top to bottom. This numbering system is universal across various competing manufacturers of breaker panels.

Hair Transplantation in Hyderabad While hair adds characteristics to your personality, losing strands of hair for no apparent reasons can cause a lot of
Hair transplant in Hyderabad