I'll put the pictures first so you can look at them and not have to read my ramblings that follow. Sorry it's so long. If you want to read the official Granny Gear race report, click here. 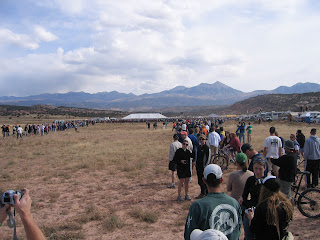 Staging for the start. 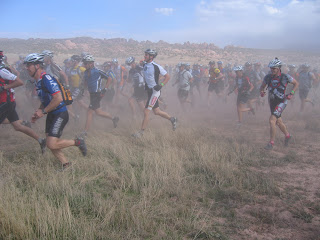 The glorious run. Who needs a mask! That's me on the right, pacing myself. 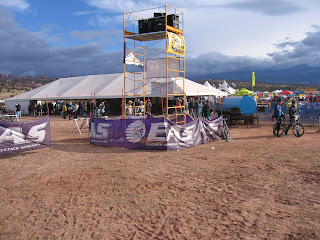 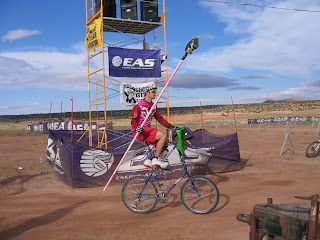 This place is a real circus. These guys came in 3rd in their division.

Stuart was greeted by Granny Gear as he completes our last lap. 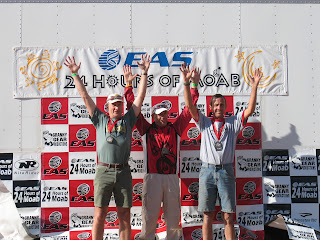 Top of the Podium. 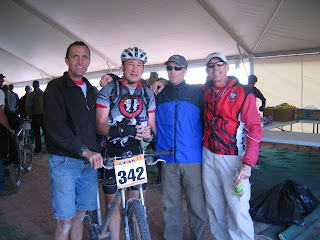 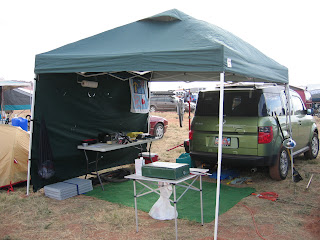 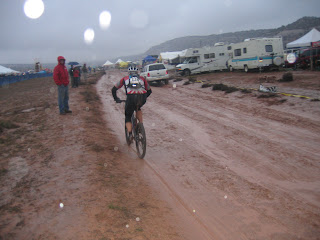 The race is done and it was a success. Our Grand Masters Team had great chemistry and mojo as well as excellent support from Mad Dog Cycles all of which combined to give us a 59th place overall out of 388 teams and the catergory win for the second year in a row. We each completed 4 laps and finished with 16 total. I want to thank our team captain Bill Dark as well Dwight Hibdon and our Mile High secret, Stuart Edgerly for a fun weekend and many good memories. I also want to give props to Stuart's wife Anna for her support, good coffee and positive attitude. Thanks Anna.

The conditions this year were excellent with a dry, sandy course, clear skys both day and night, and little wind. It got down to 40 by my thermometer in camp, but I'm sure it was colder in pockets on course. The course was rough and has eroded over the last few years due to extensive 4x use and last years monsoon. Many of the drops are bigger and followed by sandy, rocky landings that increase the level of technicality on an already demanding course. This course is not for the faint of heart, especially at night. I did 4 laps and only fell twice, so I was quite happy. I had no gear issues so there is no excuse for my times being what they were. Maybe a lack of specific training and father time have something to do with that. I'll work on both of those issues and get back to you later.
I volunteered for the first lap which was the LeMans run around a tree 150 yards from the bike staging rack. My best running days are 25 years behind me and was evidenced by the fact I was pretty near the back of the pack when the 300 yards were completed! Embarassing. I made up for it when we hit the dirt road and passed a good 50+ riders before we hit the single track. That was a joke as riders were scatters 10 wide all over the trail walking their bikes due to the conjestion. I probably ran another 300+ yards before I could get back on my bike, only to have to get off again and run another 100 yards. That's the penalty for being a slow-ass runner. The rest of the first lap was uneventful and was filled with following riders that took me over lines I had not considered before, some of which were good and others questionable. I rode the "Ledge" on all 4 laps and that was big for me because I've never gone over it at night - too chicken! I also rode the slab at the start of the single track on 2 of my 4 laps - that too is a first.
My second lap was much better as the conjestion had faded and I was rushing to beat the sunset. I rode with my helment light, just in case, but did not need it as there were still a few rays of light remaining. I finished with the 3rd fastest lap for our team.
The 3rd lap was a disaster. I started out forgetting where I left my bike and took forever to find it. I guess that was my senior moment for the race. At least there was another guy with me that also "lost" his ride! As I said, my night vision is not what it used to be and I rode tenatively. That kind of riding leads to no-no's, which I had a few. I crashed on the sandy "S" turn downhill and on an uphill rocky section that I usually breeze right up. Too slow so down you go! At least I didn't get hurt abd finished the lap only 3 minutes behind schedule.
My last circuit was the sunrise lap, and it was special. By now we were about 35 minutes behind our expected time so my lap was half dark and half light. What a pleasant surprise because I expected to ride that lap in the dark. I started slow and finished strong as the sun rose over the LaSalles to the east. It was partly cloudy so the sunrise was less than spectacular, but, the rising sun lifted my spirits and made me happy to be where I was. That was a much better mental place then where I was at 1:00 am.
Dwight,

Bill and Stuart finished their 4th laps without incident and we did well. We beat one of the 3 Masters teams and beat all of the girl teams. That feels good to not get chicked in a big event like this. We were 59th and the Expert Women winner was 60th. Yeah babe, take that! I hope we can stay ahead of them next year.
As I finish writting this I am fighting a sense of depression and I don't know what! The season is done and rest and recovery are in order. I don't want to stop because I'm afraid I won't be able to start up again, so, I'll keep pushing on. In a few weeks all will be back to normal and routine will set in. I have a 2008 Gary Fisher 29er Rig SS coming in so I can look forward to just playing around until training begins.
Next year will be better than this year and I'm excited to see what it brings. I'm even more excited to see my racing buddies again and build on the lasting memories I cherish. Thank you to all that have helped me and have a nice winter.

Always fun down there. Good riding Brad. We need to get out into some sunshine this winter.

you sound like you are saying good-bye for an extended period of time. It is not good-bye, but hello southern utah. That is where winters weekends are spent. So see ya down south!

Brad,
You guys did great!
Let's hook up and ride some time.