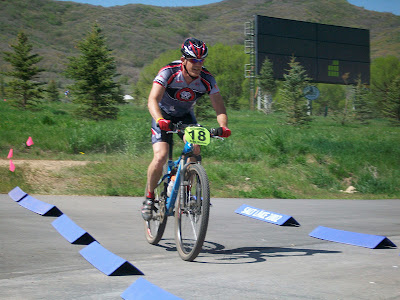 Thanks for the pic Kendra.

What a great day for ICUP racing. The temp was perfect, the skies were clear and sunny and there were a ton of people toeing the line waiting to attack this great course.

Ed does such a great job with his series that we don't even know how spoiled he has made us. Unbelievably, he started the Pros within 2 minutes of the advertised start time and that's after running the kids races. Way to go again Ed. You're the man.

I had an excellent race today and finished 2nd out of 6. I am really pleased given all that has been going on healthwise the last 5 months and my limited amount of training. I rode as hard as I could and had no mechanicals or crashes. That's good! The only mistake I made was letting the winner gap me at the start by about 20seconds thinking I could real him in as the race progressed.

I came out of the chute in 5th and struggled up the 1st hill while Lewis Rollins was putting the hammer down in the lead. He was pushing an aggressive pace that I was certain he could not hold. I kept him in sight for the whole 1st lap and got to within 20 seconds on the last climb on the first lap and felt I had a chance. To my disadvantage Ed mentioned my name when I came through the start/finish line and Lew heard him (he told me that after the race). Lew was still in sight and I knew I had less than 15 minutes left, and, if I was going to catch him I had better git er done right now. I called to the engine room for more power and the response back was "that's all we got boss"! That's not what I wanted to hear. Lews a pretty short guy and he kept getting smaller and smaller and smaller. Every time I'd round a corner and see him I thought I was getting closer, but he was actually 2 turns ahead of me! Damn!!! I kept pushing hoping he was going to bonk or hit the wall, but it was not to be. Once I got back on the single track after the fast paved portion near near the end I saw he was too far ahead. Good for you Lew.

It was fun actually racing someone and having to work hard, even though I came up short. I love to race and I love competition and I had both today.

What a great day for racing and a great race. Congrats Lew.

I've had 2 races in 4 days and all is well. No heart pains, no nothing. I think my dealie last week was asthma and stress related and my ticker is good. The VA has scheduled a Nuclear Stress Test for June 2 so I should get a clean bill of health then will put all my worries to bed. In the meantime I've got to get back to my Leadville training routine and hope Lynda's 100 Mile PR program can work a miracle for me.
Posted by Brad Mullen at 5:29 PM