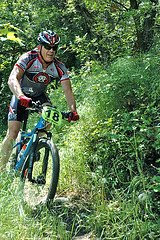 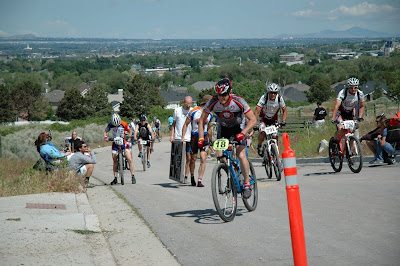 I don't have any Sundance pics so hears one from the warmup last week at Draper.

Today was another great racing day. After last weeks exciting 3rd place finish behind Jim Westenskow and Lewis Rowlins, I was looking for a little redemption this week. In reality, I was just hoping to keep them in sight for the 1st lap and then blow apart on the 2nd.

The race started in the upper parking lot so we did not have to start at the bottom and climb that long damn pavement hill. Ouch! We did do it twice, but it was nice not to start on it. My group started with the Clydsdales and Bill Dark immediately shot to the front of the pack. I marked Dwight Hibdon but knew there was no way I would keep his wheel for very long. He is riding real strong this year, and he's 30 lbs lighter than my fat ass! By the top of the pavement climb I was still in 2nd and Lewis tried to come up on me before the single track but I accelerated and put Greg, a Mad Dog Clydsdale, between him and me. Nice move Brad :-) Jim was having brain farts shifting so he unexpectedly fell back and was in 3rd at the single track, but working extra hard to catch up. I decided to put the hammer down in the woods and go as hard as I could for as long as possible and hoped Jim, Bill & Lewis would tire trying to catch me. On the switchbacks by the pond, some gomer shifted at the wrong time as the trail pitched up and fell and knock me off my bike, then, he tries to get back on and stay ahead of me. I didn't let that happen and never saw him again. Lewis was 1 switchback behind me and was looking strong. I expected him to come up on me but he stayed back as we began the long flowy climb through the trees. At the 180 degree turn he was less than 10 seconds behind and I could see Jim on his tail. I kept my head down and pushed as hard as I could and gasped in relief when the dowhill came and I was still ahead of them. I sped down the single track and caught some guy and had a fast chick on my tail. I guess we made him nervous cuz he went head over heals off the trail and we sped on by (he was ok). I let the chick pass me cuz I didn't want to be her next casuality. Crusing down the trail was very controlled and exciting, and I didn't take any chances on the first lap. After passing the start/finish line on the 1st lap and heard Ed say Lewis's name and he was about 50 seconds behind now. That's what I wanted to hear. Shortly after that Jim blew by him and almost caught up to me!!! I got to the single track before him again and put the hammer down again. Today was one of those days where I just felt like things were good. I fully expected Jim would catch me cuz he was always there when I looked back, but he didn't. I could see him at the 180 turn before the S turns in the trees, but he didn't close the gap. Going down hill I opened it up a little more knowing if Jim & I got to the road at the same time he'd kill me on the climb, so the downhill was my only chance to seal 2nd place. Luckily I put some time on him on the downhill and got to the finish line about a minute ahead of Jim. Another great race with an even better outcome for me.

Mad Dog finished 1, 2 and 4 in my group and, we solidified our 24 hours of Moab team with the addition of Jim as our 4th rider. we're going to be strong this year - maybe the strongest ever. I don't know why but this season seems so much better to me than any other one in the past. I'm enjoying racing more, probably because I've put less pressure on myself, and the competition has stepped up significantly. Hanging around the teammates is a blast and everything is just great. Things are falling in to place for a great Leadville on August 15th.

One side note - Fidel Castro showed up at the race. Really. What an unexpected surprise. If anyone has a picture of him, I'll link to it.
Posted by Brad Mullen at 5:08 PM