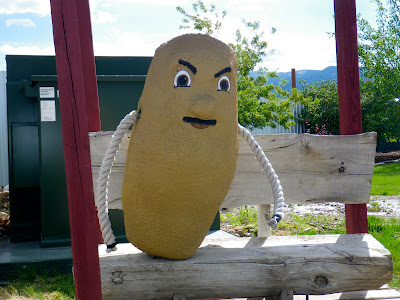 I think this guy had an issue with me and was following me around all day. 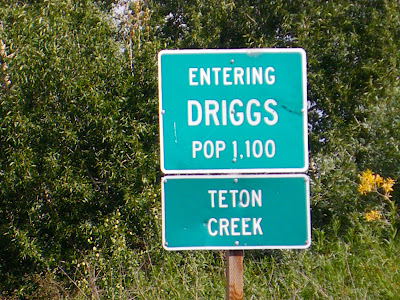 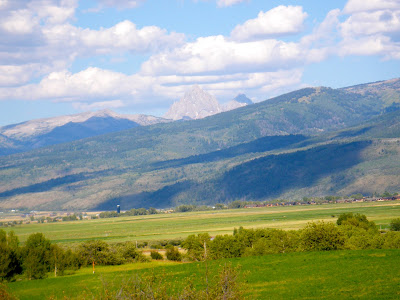 The Grand Teton is in full view coming in to the valley. You can even see it on the drive up canyon to Grand Targhee. 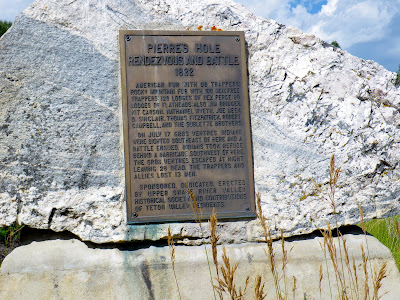 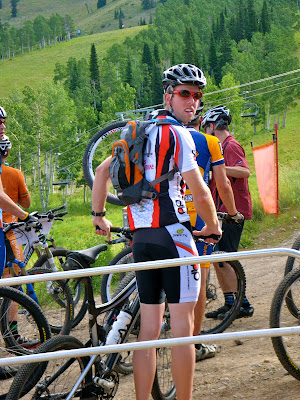 This was Craig Carlson's first endurance race and he was uber fast. This guys got a future in the sport. Hopefully he can make more than $25 per pop! 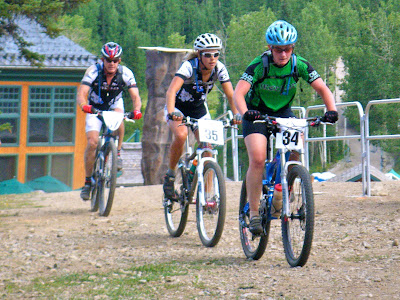 Here I am at the start chasing Mad Dog teammate Brittany Kener and another chick that kicked my ass. It never got any better than this. 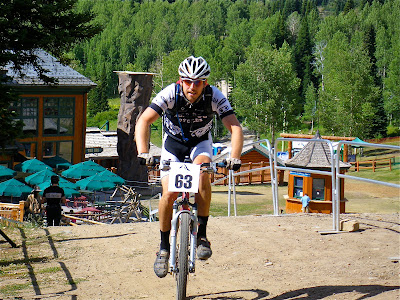 Garrett Kener was on it today. He's always strong and a great guy to ride with. WTG Garrett.


Eight minutes in to what was to be a 6 hour 42 minute ordeal, I knew it was going to be a long day. A rider in front of me went down on a downhill off camber corner and I went down trying to avoid him. Unfortunatey my day continued but his mercifully end with a broken tailbone. That's how bad my day went!

The weekend started with a relaxing Friday drive through beautiful SwanValley to Driggs Idaho where we checked in for Saturday's race. Garrett and Brittany Kener and I arrived before Craig and Jessica Carlson so we went through the process and headed to their base camp at the Teton Valley Cabins. I checked in with the Carlson's at the luxurious Super 8 just north of town. Actually, it was a nice room, except for the screaming shower. We ate dinner at the Royal Wolf and went back to the motel and got ready for what we thought would be a tough, but fun, well supported event. Were we in for a surprise!

The race began with a 10+ minute "spread em out" lap before a gnarly single track downhill. Like always, the hotshots took off at a XC race pace and us wanna be's followed. Before I knew it I quickly passed through heart zone 4 in to 5!!! Yikes, that was not according to my plan for a day of steady zone 2-3 riding in preparation for the Park City Point 2 Point race in 2 weeks. That high paced craziness lasted a good 15 minutes and I knew I'd pay for it later.

The course was rougher than I expected and lacked the flow of Park City and Deer Valley. Lots of small stumps and roots, rocks, very loose dirt, tight turns, off camber single track, and unrelenting steep climbing. It was advertised that there were 2 support/fueling stations but the first one was an unattended blue water cooler at the back of parking area that nobody saw! That impacted most of us very heavily as the race unfolded. The 2nd station (actually the only one most of us saw) was a well stocked and attended tent that had everything I needed, including very friendly and helpful volunteers. Thanks you very much for being there and your positive spirit. Without you, I'd be dead! 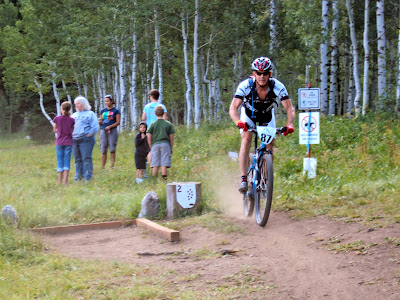 Back to the beginning of the race. After we zipped through the baby start loop we headed for the dreaded downhill, narrow, white knuckle ST trail towards a wooded, rocky section that lead past the unmarked aid station to the first long section of paved climbing. Although the pavement climb went on for miles, it was welcome relief from the pounding we had just gone through. The route hopped back on the ST for more bouncy double track and another loose, white knuckle rocky ST descent before we passed through a beautiful section of private property pasture that lead to the only true aid station on course. At this time I was averaging 10 mph and feeling confident I'd have a 5 hour day. All systems were go and I was in a good place. But that was all about to change.

The difficulty of the course exposed itself immediately after the aid station at the coral - roughly mile 13 - where the climb from Hell began. It was 3+ miles of ST that went as steep as 24% and it was merciless. There was no air circulation, it was hot, and did I mention it was long and steep! I walked a bit of this section on lap 1 and most all of it on lap 2! Afterwards I found out most everybody walked some of it, even Brittany. Except for my initial crash and backtracking about a half mile before the end of lap 1, all systems were still a go as I completed the first 25 miles. But my hopes of a 5-hour race were dashed.

Can you say CRAMPS!!! About 2 minutes after completing lap 1 the cramps began. It was totally unexpected since I was religiously popping E-lyte cabs every 30 minutes and took extras when they were available. I thought I was drinking enough, but I probably fell behind and that contributed to the problem. Without going in to great detail, I must of cramped 50 times - more than I have in the last 8-9 years combined! Whenever the trail headed up, on came the cramps and I turned in to a hobbled hiker. I must have pushed my bike for several miles and my 2nd lap was almost 2 hours slower than the first. All I can say about lap 2 was it was shear will and survival instincts that got me through it. I was a whopped puppy looking for someone to mercifully put me out of my misery. Suicide was an option, but I couldn't find a place to do it and make it look like an accident! So I continued to suffer to the end!

When it was all said and done, I finished 4th from the last (click here for results) of those that completed the 50. Quite humbling and a big eye opener for the PCP2P in 2 weeks time. Rumor has it they are changing the 2011 course to 3-33 mile laps for the hundie, but I don't know what the 50 will bring. I do know it won't bring me back, I think. If you are looking for a very challenging 100 miler, give this some serious thought and a whole LOT of respect. Even with the new course, it's gonna be Big Bite to swallow.

Craig, Garrett & Brittany had good races although Craig and Garrett both battled cramps on lap 2. Somehow Brittany was immune to the cramps and finished in fine fashion with a smile on her face - so I was told. Maybe it was the Friday night beer! Hmmmmm. The four of them kindly waited for me to push across the line and I felt very grateful to finish in the saddle. Craig's wife Jessica was a great supporter and without her being there I may have packed it in after lap 1 (it was a pride thing). Thanks Jessica.

Overall it was a great weekend and one I won't soon forget. The event was well run, the after race "reward" beer and spag dinner were most excellent, the raffle was great and very generous and all the folks affiliated with the event were incredibly friendly and very helpful. The Royal Wolf Bar and the Bunk House Bistro served surprisingly delicious food and the weather was very cooperative, except for the heat. Dave Byers has a race recap that is probably more accurate than what I have written. The course was probably better than I described but I'm trying to make excuses for why I sucked. I still don't think I'll do it again...
Posted by Brad Mullen at 7:39 AM

Woah that sounds intense, I just saw Driggs and had to read this! We go to victor all the time, we are actually going there this weekend and need some trails to ride, preferably in Victor/Driggs area. So is ANY of the trail worth riding? what is this race called? we didn't know there was an endurance race in Driggs!!! I am so curious!