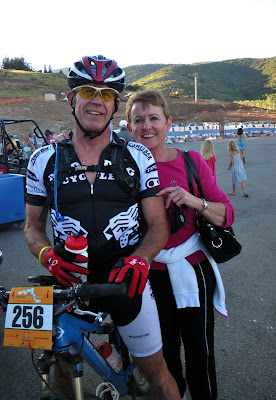 Jane and me after it's all said and done. 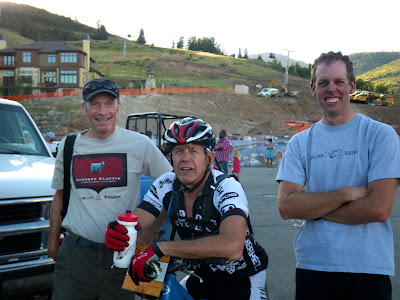 Two of my three fans - Dwight Hibdon and up and coming, soon to be endurance icon, helmet hair Craig Carlson. 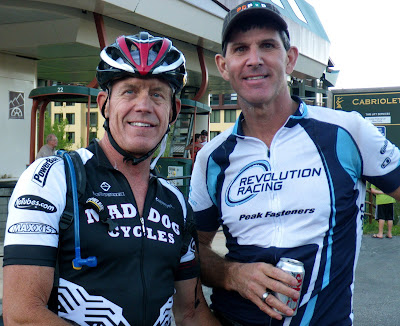 Me and Brad Sneed. 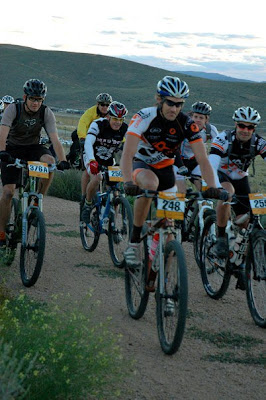 I'm mixing it up at the start with the Big Boys - Brad Keyes and Craig Carlson. 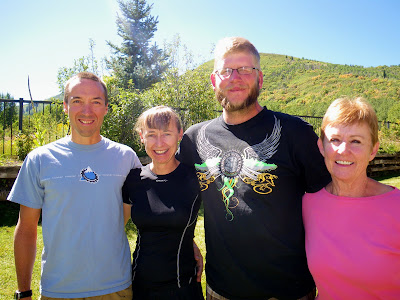 Sorry this is so long. First of all, thank you so much to the Mad Dog support Team headed by Kendra Clark, and my Grand Masters buddies Dwight Hidbon and Craig Williams for all the support and help you guys gave me. And thank you Jane for your support of my weird addiction. I'm really sorry about that but no matter how hard I try, I cannot not stop :-) Maybe in our next life we can eat popcorn, smoke cigs and take up bowling together.

The race was everything I thought it would be, and more. The weather was perfect, the course was superbly marked, the neutral support was more than ample and the spectators were very supportive and encouraging. I especially liked the Canyons Resort finish along the walkway with all my cheering and adoring fans welcoming me home. I felt like I was on top of the world :-)

I had one goal for this race and that was to finish in good style. My plan was to keep myself under control, zone 2 and low zone 3, until I got to Park City Mountain Resort (PCMR), then let the big dog eat to the finish at the Canyons. I listened to Coach Lynda Wallenfells suggestions and followed them better than I have before, and it paid off. From the results it looks like I may have passed 30+ riders during the 2nd half of the race. And for those of you that are not familiar with the course, the 2nd half is monumentally harder than the first. It felt good seeing familiar, exhausted faces that had blown by me earlier, stopped dead on the side of the trail, unable to move. It kinda made me feel young again - lol.

Back to reality. Almost everybody kicked my ass. I finished 4th out of the nine 50+ guys that started, and 150th overall which was 4 hours 27 minutes behind the young stud that won. The tops guys and gals are all National/World caliber riders so I felt privileged to be in an event with them. Their strength and determination is unbelievable.

Enough of them, back to me. I started with the 10+ hour projected finishers and rode the 10 mile Round Valley loop without getting in to zone 4. I was on plan and feeling very comfortable and confident. The ride on Lost Prospector was uneventful and included two places where I walked to save energy. That was one of the keys to my success in this race. I left my ego behind and did what was best in the long run, and it paid off. Burning matches early in an endurance will come back and bite you 7 or 8 hours later. I didn't get bit today.

Jane met me at Solomere and gave me a fresh water bottle that took me to Silver Lake #1 in about 3:23. After a quick food exchange and pressure correction on my fork, I was off again. Within a few minutes, I was hoofing it again as the trail got real steep and unridable in several sections. I was on and off, mostly off, my bike to the top of Deer Valley and headed down Bowhunter. That's where I almost bought the farm. I had a brain fart and lost my focus for half a second and teetered on the edge of a very steep drop-off only to stop my momentum as my front tire went over the edge. WOW! That got me focused again. I got through BH and hooked up with Tiffany Martin and we finished off Flagstaff and Nail Drive back to Silver Lake 2 together. That lap took about 1:22.

From Silver Lake 2 to PCMR is the crux of the course for me. I pre-rode it a few times and was familiar with it enough that I was not intimidated like in 2009. I walked a lot and stayed in my granny a lot, but I completed the climb from the bottom of Sweeney's to the descent at Shadow Lake in 65 minutes. I hooked up with fellow masters rider and Leadville finisher Tim Fisher before Sweeney's and we rode together until Apex. Tiffany caught up to us at Apex and she and I again rode together to PCMR and got in at 3:06 which was just before the cutoff time of 3:30. I rode this leg in about 3:22. Now I knew we were gonna finish this beast and my spirits were again lifted.

This was Tiffany's first endurance race and she was having issues and challenges that almost did her in. But she is one tough cookie. She got back on her bike and finished the entire ride and earned her finishers socks. Her feet were too sore to put them on, but she finished. Truly amazing Tiffany!

Back to me :-) As I headed out of PCMR I was soon joined by Ben Schmalz (?) and another guy that were both content on letting me pace them up Spiro's to Mid-Mtn where Ben and I dropped the guy and passed several others. Somewhere along this section I ran into Brad Sneed and we rode together for awhile. Sorry Brad, but my mind was foggy about where we hooked up, but I remember we talked. We passed quite a few riders in this area and my conservative strategy was beginning to pay off. With each body I passed, I got stronger. I struggled up the new switchback section (luckily I didn't walk any of it) and kept the pace steady. At the top of the SB's my gps died so I was no longer distracted and limited by it and my HRM. It died at 9 hours 25 minutes and 61.94 miles. I was relieved to be released from it's burden and rode the rest of the way by feel - and I liked it.

The aid station at the Colony was very welcome and I filled up on Coke and Chocolate Chip cookies. Again my spirits were lifted and Ben and I headed off for the last 12 miles to the finish. We chatted a lot and it kept our minds off our sore butts and aching hands and shoulders. I was stronger on the descents and would open a big gap, and he would close back to me on the climbs. He was a very strong climber. We seemed to work well together but he never took the lead the entire time from PCMR to the finish. But that was fine with me cuz I didn't want to blow up trying to stay up with him.

The entire time on Mid-Mtn Ben was asking if we were gonna make it in 10 hours. I said no, but maybe we can sneak in under 11. That didn't happen and I finished in 11:22 with Ben about 2 minutes back of me. When I finished I felt great. I was not a dead-man-walking like last year, but I was relieved it was over. I was greeted by my wife, Craig & Jessica Carlson, Garrett & Brittany Kener, Craig Williams and Dwight Hibdon - my adoring fans - hahaha. They all came in 25-45 minutes ahead of me but hung around to see if my sorry ass was gonna make it. And I did. Thanks for waiting guys - it meant a lot to me.

Afterwards I was chatting with Dwight and he suggested doing the race next year as a duo. That's sounded pretty good at the time, but, amnesia is setting in and I'm feeling like as long as I can still make the cutoffs in time, I'm gonna drag my sorry ass around as a solo. Seeing how hard this course is, next year may be my last solo effort.

Of all the epics I've done over the years, this one was by far the most friendly to my stomach. I kept it simple and ate only Hammer gels and Clif Blocs, 2-half bananas and lots of Endurolytes to PCMR, and I felt great. I also stayed ahead on my hydration and that made a huge positive impact. After PCMR I feasted at the Colony aid station and I was still feeling fine at the finish. Sunday and today have been a little different story as the exhaust is suggesting all is not as well as I perceive.

So, I'm happy. Jay and Shannon ran a spectacular event, all my friends finished, nobody got injured seriously, I'm still married and I met a few new friends. And that's what this entire journey is all about...

Click here for the official results.
Posted by Brad Mullen at 7:03 PM