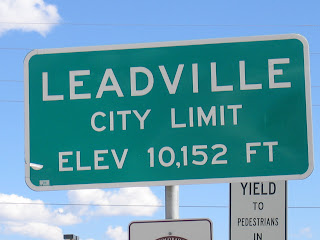 That says it all.

It's Sunday night and I'm back home in good ole Salt Lake City. Aside from seeing my wife Jane and daughter MarKay again, I'd rather be in Leadville. That is one nice town with a lot of really good people. I hope I'm lucky enough to get in the race next year.

Back to Jesus, he lives and I saw him during the last 2 miles of the hike up to the Columbine Mine which topped out at 12,600 feet and 52 miles into the race. I'm not kidding but that's the closest I've ever come to passing out and just giving up in a race. The Man had the door open and said come on in, you idiot! I said, thanks for the invite but I’m not quite ready - I've got a belt buckle to pick up later this afternoon. Then maybe we can talk. When he saw me in the aid station with the oxygen cannula in my nose and the wonderful nurses assisting me, the Man knew it was too late. I'm just not ready.

Before I ramble on any further, a few stats for my racing buddies. Then you can stop reading and not get bored with other all the other BS.

One question I always deal with is "could I have gone faster?" On that day, having never ridden the course, probably not. I do think though that with a few changes in my training and my approach to the race, and better pit stop management, I can do better. Do I think I can break nine hours? Honestly and realistically, no. But that won't keep me from trying.

Back to the race. It's amazing how well the race was supported, both on the course and in the town itslef. Everybody was happy to see us and extremely polite. As fara as the race goes, it is totally possible to do this race without a pit crew just by using the well-stocked aid stations the provide. Rob Westermann helped me at the Twin Lakes 1 aid station, and after that I was on my own. No problem at all. Although I only ate real food at the Columbine Mine station, which I thought was going to be my last supper, one could lose countless minutes looking at all the food options at the 3 pit stops. I almost felt like I was at a Sunday brunch. And the people were so helpful when you came to the aid station. They would hold your bike, fill your water bottle and bring your bag and food to you. Wow, how's that for service. And they had a smile on her face. They were so nice and so positive I felt like I was leading the race. The Leadville support people are like having family in your corner, they were so uplifting. By far, this is the best supported race I've ever attended. And the energy level was off the charts. Everywhere you looked there were people lining the course cheering, clapping, waving flags, ringing bells, and just have a good time. How could you not love it!

As far as the course goes, it's a mixed bag. There are flat roads, undulating roads, gravel fire roads, very little, if any, single track, long steady grade climbs and steep unrideable roads/trails. I talked to the guy that finished in 18th place and he was able to ride most of the course except for the Powerline Trail and one other steep section before the Powerline aid station on the way back to the finish. That's impressive! On the way back I saw one small girl that was ahead of me by several minutes ride about one third of the Powerline Trail, which everybody else was walking, and she totally blew up. I think she finished about 40-45 minutes behind me and she lost all that time in the last 20 miles. Warning to future racers, do not attempt to ride the PL. You may live to regret it. 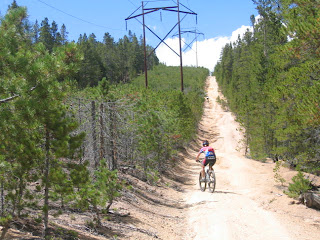 Ellen and Jody on the Power Line Trail 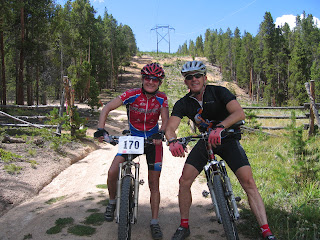 Ellen and me at the bottom of Power Line, the day before the race.
Before I go I have to thank Rob Westermann and Ellen Guthrie for their great company and hospitality. Rob wasn't able to race due to an injury so he provided great support and encouragement. Next year it's his turn and Ellen will be in the pit. That's bad news though because he's moving to my age group next year. It's already difficult getting on the podium, now I have to contend with HIM! The good news though is he'll be a very serious contender for the top age group spot and that will be real cool. I also want to congratulate Jody Anderson on her excellent race and pushing through some big time knee pain. Most people would have quit but she kept on pushing. Way to go Jody. We were fortunate that all three of us finished the race and took home the silver belt buckle and came away with no lasting injuries, other than the normal aches and pains associated with such masochistic behavior. 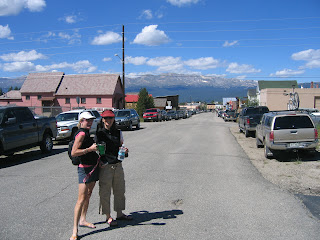 Ellen and Jody styling before the pre-race meeting.